You are here: Home / Pilates / Pilates-blogs / Blog Anula Maiberg / The Art of Cuing

Cuing can be an Expressionist, Minimalist, Abstract, Formal, Hyper-realist and a Surreal Art form. And that is Art with a capital A. Personally, I fall somewhere between staunch minimalism and a black hole in terms of language. Think Donald Judd meets the sound a library makes. I say very little without much intonation. My “style” of teaching – for a lack of a better term – works and doesn’t work in equal measure. Saying almost nothing other than what is absolutely necessary for a student to preform an action, is that the lesson can seem rather pedantic. So I need to find ways other than using language, to get the human in front of me to move well. My method of teaching springs out of mortal fear of saying things that are categorically untrue. It isn’t rational but I try to own my issues outright.

The good news is that students of an almost silent teacher sometimes end up being more responsible for their hour of practice. In a more quiet session, students could potentially take the time to listen to other things. For example: the sound of the springs; the sound of the carriage coming all the way “home”; traffic; birds chirping. But most importantly, their bodies. Saying very little can give a student the freedom to figure some stuff out independently of the teacher. This results in a relationship that is based on trust: the student trusts that what I say is important because I don’t say much.

The ever prevalent questions I get from new students are: “what is this for?” and “where should I feel this?”. These questions are problematic in different ways. “What is this for?”, in my opinion, isn’t an actual question in the context of Pilates, but an accusation. As in saying: I don’t find inherent value in this movement or lack of movement, you are asking me to perform. “Where should I be feelings this?” is a bit more accusatory in the sense that the implication is that there is pain, which obviously I am not looking to cause. Or not enough buildup of lactic acid in a concentric manner which is resulting not finding value in the movement. It is quite possible that if I spoke more and more knowingly and with more authority and precise enthusiasm, I may not give room to be asked questions that stem from boredom or general lack of stimulus (mind and body). I certainly have a lot to improve on this matter.

To offset my problem, I love taking class with teachers who are talkers. But not all talkers are made equal. There are talkers that fill the hour with a constant symphony of words which aren’t meaningful. Maybe it’s better than the vacuum I create? But I doubt whether shouting “piriformis!” and “lengthen!” at random times, has actually helped anyone during Stomach Massage.

Then there are the geniuses of the Talking Teacher. These masters rarely have what I think of as “negative cuing”. They don’t spend a lot of time, if at all, on what they don’t want you to do and put the emphasis on what they do want. It can be a bummer to be told what you’re doing wrong all the time. I have been known to say to students who have been, for example, coming up into Teaser in a non-optimal way: “maybe try that again but less weird”.

A few NYC based teacher come to mind when I think about the master talkers: Alycea Ungaro, Jennifer DeLuca and Jan Phillips. All vastly different teachers and personalities they’re unified in being able to speak for an entire hour and still make complete and brilliant sense. They know what they mean and are consistent in their dogma. There isn’t a lot of flowery language such as,  “feel the back of your leg slowly spread long on the mat”. Did you mean straighten my knee? Because that I can do. In their hands I am never being asked to “lengthen” at random. Nothing is random.

The cuing is so fine tuned and joyful, that taking class feels like silk and the talkers filled with amazing, otherworldly, fantastical imagery. Cara Reeser has her own syntax and its not always English based. I’ll be doing something and then be asked to do it again but with more “sparkles”. I don’t know what that means, but when I do it again it feels better and even more sparkly. Who wouldn’t want to be more sparkly? She can also lay a hand on my shoulder and hum and suddenly something that felt impossible becomes possible. Cara says something that I, too, try to also say often along the lines of: “that was a very nice expression of that movement” which often means: “try that again but less weird”.

I am very lucky to have a business partner who is, in some ways, more like-minded to myself in terms of sparse language. Jeremy Laverdure does not say much to his long term students. He assumes they know their “Up Stretch” from their “Down Stretch”. When he does decide to say more, he will often stop the flow of the hour to explain what he means in detail. If he is going to mention bony landmarks or muscle insertions, he will also take the time to pull out a picture or point to a skeleton so when he yells “piriformis” folks know where that is exactly and why he’s yelling it (for the record: Jeremy actually has never yelled during a lesson I have been witness to I only said that for dramatic effect).

So going all the way back to making the quiet work. The answer is I don’t really know. My “teaching truth”, as annoying as that sounds, is to honor my students by not trying to emulate my betters but to try to be better at what little I say. 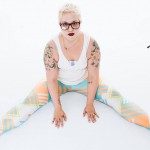 Anula Maiberg (30) co-owns Sixth Street Pilates in the East Village in New York City. Anula was born in Israel and moved to NYC in 2001 in order to pursue a career in photography.  While working on her degree at the School of Visual Arts she fell in love with Pilates through the classes and private sessions she took at Sixth Street Pilates. After college and a few years at a “desk” job she realized happiness wasn’t in front of the computer screen. She decided to attended the Kane School for Core Integration to become fully certified on Pilates apparatus under the guidance of Kelly Kane. She is now the co-owner (with Jeremy Laverdure) of Sixth Street Pilates where it all began. in 2014 she graduated the Kathleen Standford Grand Heritage Training Master programs led by Cara Reeser of Pilates Aligned in Denver CO.